The Justice Department in the Trump era has repeatedly tasked U.S. attorneys from far-flung offices to parachute into politically explosive cases in Washington, raising concerns among current and former officials that agency leaders are trying to please the president by reviewing and reinvestigating cases in which he is personally or politically invested.

After a tumultuous week for federal law enforcement in which Attorney General William P. Barr declared he could not do his job if the president kept tweeting about criminal cases, and officials revealed they had dropped one politically charged case while adding new prosecutors to others, several current and former officials expressed alarm at what they characterized as a troubling pattern.

“The power to investigate is the power to destroy,” said Gregory A. Brower, a former U.S. attorney and former senior FBI official. The current approach to sensitive cases, he said, “gives the appearance of politics coming into play whenever the president has a perceived political enemy. . . . The ability to simply point to a pending investigation against a person can have devastating effects on that person and can have a potential political benefit to the person orchestrating the investigation.” 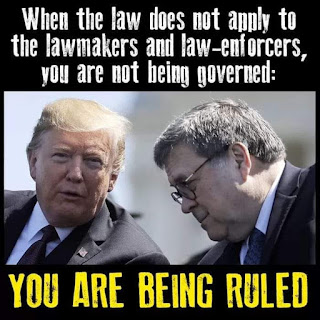 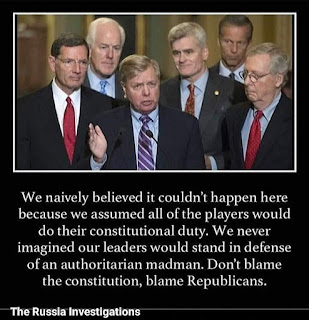 Republicans Have Made It Clear They Will Let Trump Become a Dictator. Will We? | The Nation

Republicans Have Made It Clear They Will Let Trump Become a Dictator. Will We? | The Nation:

Trump’s attacks on the federal judiciary are the domestic Signal this week. Freed from all accountability by the Senate, the realtor’s inner autocrat is on full display, with a pressure campaign on the Justice Department to back off on its sentencing recommendations for his convicted friend Roger Stone, and with an extraordinary flurry of tweets personally attacking the judge in Stone’s case.

Trump’s actions got so extreme that, amazingly, even Attorney General Barr finally had enough. On Thursday evening, in an extraordinary exchange, Barr, who has done more than anyone else to protect and enable this lawless presidency, said that Trump’s tweets were making it impossible for him to do his job. Trump wasn’t humbled. By Friday, he was on the attack once again, claiming that he had the legal right to interfere in federal criminal cases.

For Senator Susan Collins, who absurdly claimed that Trump had learned his lesson after being impeached by the House, and for the other “moderate” Republicans who voted to acquit, this week has been a nightmare. Sure, they can dismiss it as simply more Trumpian Noise, but when the attorney general of the United States personally undermines his own career prosecutors to do a solid for the president, that’s far more serious than mere chatter. 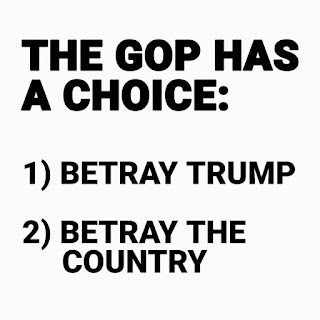 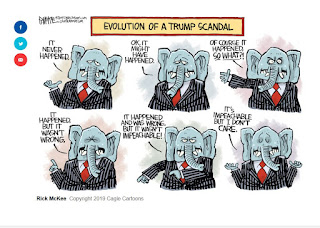 A diary written by a Yorkshire farmer more than 200 years ago is being hailed as providing remarkable evidence of tolerance towards homosexuality in Britain much earlier than previously imagined.

Historians from Oxford University have been taken aback to discover that Matthew Tomlinson's diary from 1810 contains such open-minded views about same-sex attraction being a "natural" human tendency.

The diary challenges preconceptions about what "ordinary people" thought about homosexuality - showing there was a debate about whether someone really should be discriminated against for their sexuality.

The U.S. Military Is Not Ready for a Constitutional Crisis - The Atlantic

The U.S. Military Is Not Ready for a Constitutional Crisis - The Atlantic:

I spent nine years on active duty in the U.S. Navy. I served as an aircraft commander, led combat reconnaissance crews, and taught naval history. But the first thing I did upon joining the military, the act that solemnized my obligation, was swear an oath to support and defend the Constitution. How strange, then, that despite all of my training, the millions of taxpayer dollars devoted to teaching me how to fly, lead, and teach, not once did I receive meaningful instruction on the document to which I had pledged my life. 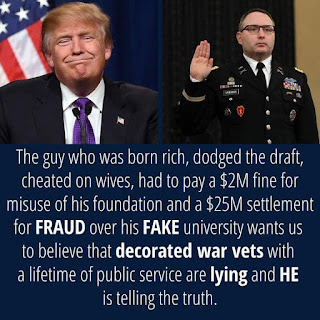 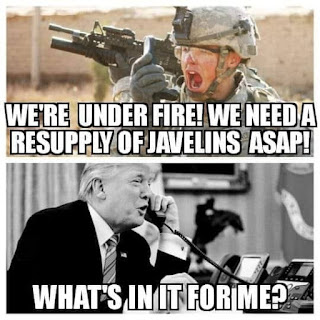 Email ThisBlogThis!Share to TwitterShare to FacebookShare to Pinterest
Labels: Ken Harbaug, the atlantic, the Constitution, US military

As the fallout from the controversy surrounding Roger Stone’s prison term continued Tuesday night, President Trump defended his longtime confidant by firing off a barrage of heated tweets attacking the federal judge and prosecutors involved in the case.

Over the course of about two hours, Trump cranked out six blasts about the handling of Stone’s sentencing, including one that targeted U.S. District Judge Amy Berman Jackson, who is presiding over the case, by name.

He implied that Jackson harbored some broad bias, linking the Stone case to her role in the sentencing of his former campaign chairman Paul Manafort and her dismissal of a Benghazi-related lawsuit against Hillary Clinton. 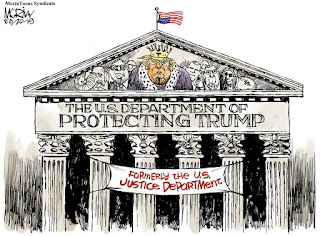 Imagine for a moment that two people running a business together have a dispute over where to invest their funds, so they strike a compromise and write it into their contract. For two years, they agree, a little more than half of the money will go toward plant and equipment, and the rest toward labor costs. A few months later, however, one of them says they’re borrowing too much, so he proposes to cut spending sharply — but just on labor.

That’s a clear deal-breaker, right? And yet that’s exactly what President Trump is proposing to do in his latest budget: renege on the agreement he struck with congressional Democrats last July by cutting non-defense spending while continuing to increase the defense budget. The share dedicated to defense spending would grow steadily under Trump’s proposal, escalating from 53% this year to 55% in fiscal 2021 and 62% in fiscal 2030. 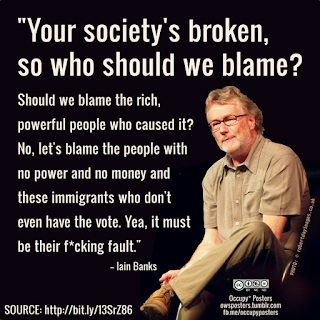 Budgets Don’t Lie, but Trump and His Enablers Do | The Nation

Budgets Don’t Lie, but Trump and His Enablers Do | The Nation:

Before declaring President Trump’s State of the Union speech a “manifesto of mistruths” last week, Speaker of the House Nancy Pelosi demonstrated her disgust on national television by ripping the speech in half. “He shredded the truth, so I shredded his speech,” Pelosi later said. Though Trump and company have expressed outrage over her protest, they presented a budget proposal on Monday that essentially admitted the speaker was right. Since budgets don’t lie, we should pay attention to what the numbers actually say.

In his speech, Trump declared, “From the instant I took office, I moved rapidly to revive the US economy.… If we had not reversed the failed economic policies of the previous administration, the world would not now be witness to America’s great economic success.” But Trump’s budget numbers acknowledge that America’s economy has not come anywhere close to the 4 percent annual growth he predicted when he pushed an extreme $2 trillion package of tax cuts through Congress in 2017. 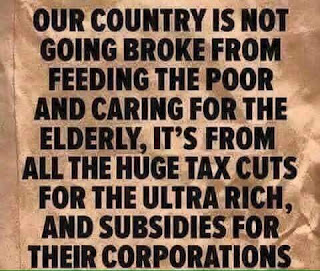 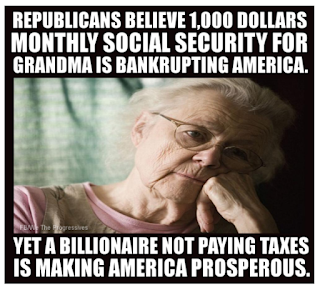 This week the U.S. Senate voted not to remove President Trump from office while Mitt Romney–a devout Mormon, former CEO of Staples, former governor of Masschusetts, who was the Republican nominee in the 2012 presidential election and is now a senator from Utah–was the sole Republican in the Republican-controlled Senate who voted to remove the president for abuse of power. Romney gave a speech on the Senate floor yesterday revealing why he so voted to remove Trump. He cited his relationship with God and his conscience as the two prime sources motivating him to cast his vote in opposition to his political party, a party he had led in 2012. 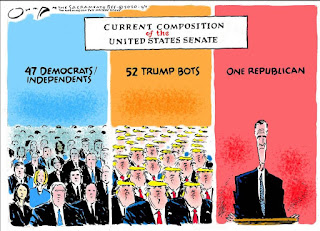 There are some things that happen in life that are hard to comprehend. Such was the case last Tuesday afternoon when my smart phone began to ping several headlines from various news sources that President Donald Trump was going to award Rush Limbaugh the Presidential Medal of Honor, the nation’s highest civilian award.

I did not get beyond the headline alerts and simply put them out of my head and continued to work. Later that night, I heard the president used the State of the Union address as the venue to bestow the prestigious award to Limbaugh. I began to see reruns of the president’s wife up in the House gallery putting the award around Limbaugh’s neck. This moment came just minutes after the president acknowledged 100-year-old Tuskegee airman Charles McGee.

Limbaugh receiving the Presidential Medal of Freedom made me remember vividly the first time I listened to him on the radio. It was during a ride with a business associate who was in town from Nashville. He politely asked me to change the station so I could hear this man who had an afternoon talk show and was “not afraid to tell it like it is.” Not knowing what I was going to hear, yet wanting to be a good host to my out-of-town guest, I complied and soon heard a bold voice talking in a blunt, demeaning and rude fashion, spewing out things I found offensive and polarizing. As we drove through the city, my passenger, who was something of a good ol’ boy, had a look of admiration on his face, smiling as he took in like a sponge what he obviously enjoyed. 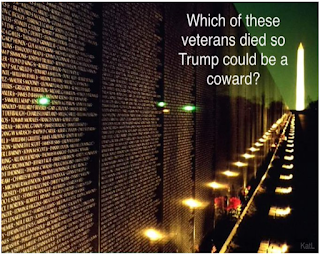 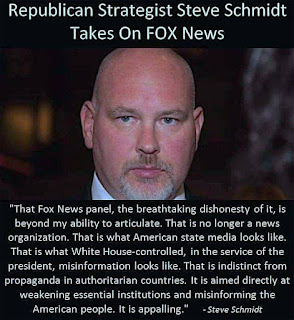 For once, President Trump spoke the truth.

“We’re doing a lot of things that are good, including waste and fraud,” he said Monday, as his administration released its proposed budget. “Tremendous waste and tremendous fraud.”

No question about it! Trump’s budget is a tremendous fraud — and it lays tremendous waste to his promises.

Remember when he said he would eliminate the federal debt, or at least halve it, during his presidency? His new budget proposes to add another $3.4 trillion by 2024 to the debt on top of the $3 trillion Trump has already added, by piling on $1-trillion-a-year budget deficits during a peacetime expansion. Under Trump’s latest plans, the debt would keep mushrooming until at least 2035 — by his administration’s own rosy projections. 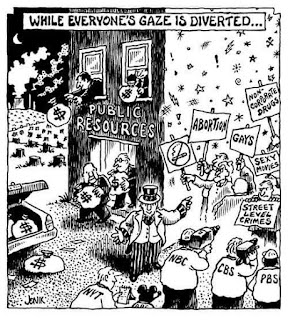 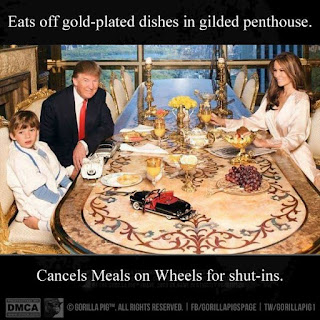 Sharing with a liberal progressive bias and no pretense to fair and balanced. Please read the disclaimer on page 2.